Next week’s second reading is at the public library in Chester, Illinois, Thursday, October 22, 6:30-7:30 p.m. My heart sticks in my throat to think of it.

Chester is the county seat of Randolph County, where Illinois began. But when I was young, the goal was to get out:  to go Somewhere and do Something. So I left Illinois for Arkansas, where people come to make a new start.

Then I began seeing the underwater panther, a horned serpent creature, akin to a dragon. I came across its image on artifacts in Arkansas. I came across it in the St. Louis Art Museum. I looked back and there it was in Randolph County, south of Chester at Piney Creek Ravine. 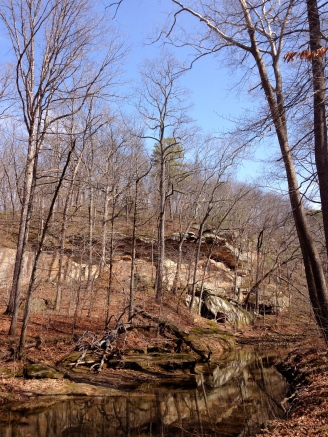 Throughout what the French called Illinois country–Illinois, Missouri, Arkansas, where the Illini lived–there are sites that predate the Illini such as these, full of art from people long before. As best we understand, such a space was valued as where the underworld meets the upperworld, a place of transition, a junction, a sacred place.

At the same time, I heard about the panther that had been hit by a train at the Menard House upriver from Chester. The state said there were no panthers/pumas/mountain lions in Illinois. The people there knew otherwise.

The panther’s presence was clear. Its power should not be ignored.

All of us inherit the pressure of where we come from. No place is small, and state lines are arbitrary. Interconnections hold meaning, if we would stop running long enough to see them. Times are hard in Illinois now, but there is power in our past that can lead to a better future. I hope to celebrate in Randolph County next week, and to say thank you. These are your stories.